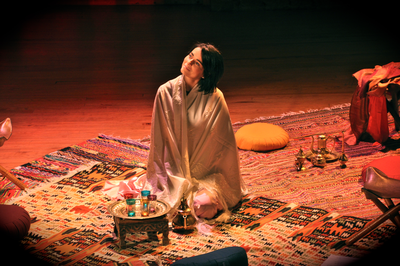 This summer, you can hear the soprano Amel Brahim-Djelloul in several festivals and in a varied repertoire.

With the ensemble Amedyez, she will give on 12 July 2017 at 7.30pm the Poètes et Poétesses d'Al Andalus'  program at the Festival les Suds at Arles, and also the Souvenirs d'Al Andalus' program at  the Musique et Patrimoine meetings on 8 August 2017 at 9.00pm (Baroque church of de Saint Nicolas de Véroce).

Finally, with the Ensemble C Barré , she will sing in a chamber music program with a decidedly Iberian inspiration. First at the Festival de Chaillol on 31 July 2017 at 9.00pm (Remollon's chruch)  and on 1st August 2017 at 9.00pm (Hameau Saint-Michel's chruch)  ; and then at the Festival de Quatuors du Lubéron on 31 August 2017 6.30 pm (Abbey de Silvacane - La Roque d'Anthéron).